the original and largest alexa davalos site; since 2005.

the original and largest alexa davalos site; since 2005.

News Press The Man In The High Castle Video Updates

One of the biggest names in alt-history will soon be history. Amazon’s premiere genre TV offering, the Philip K. Dick adaptation The Man in the High Castle, is ending after its upcoming fourth season.

Though it famously brought speculative fiction to Amazon before other genre offerings like Lore, The Tick, or Hanna, according to Deadline, the 2015 “what-if” series (about an America ruled by the Axis powers after the latter won World War II) will close out with this fall’s final season.

Executive producer Isa Dick Hackett said that, “it has been a great privilege to work alongside our extraordinary High Castle team, in partnership with David Zucker and Scott Free, to bring my father’s classic novel to life, particularly during this tumultuous period in our real world. I believe fans will be thrilled and satisfied by the epic conclusion we have in store for them.” Cast and crew of the show recently found out about the cancellation, which some have begun sharing on social media.

“With production ongoing on our fourth and final season, we can’t wait for fans to see how this final chapter in the story unfolds,” Amazon Studios boss Jennifer Salke said. “The Man in the High Castle helped define Amazon Prime Video in the genre space, and we are grateful and excited that we’ll continue to be in business with Isa and Electric Shepherd Productions for future Philip K. Dick adaptations.”

These adaptations have so far included the anthology Philip K. Dick’s Electric Dreams alongside High Castle. As far as the future goes, executive producer David Zucker has a few ideas that tease that closing High Castle’s story isn’t the end of the universe.

“While we’re bringing this chapter to a conclusion,” Zucker said, “if one thinks beyond the final frames of this series, it is very provocative to think about what stories may come thereafter. Whether or not we all get to tell them or they get told in another incarnation in film and television, that’s for us to all see. However, I don’t think you can look at this as an absolute culmination because of the nature of the stories that we’re telling with that.”

The Man in the High Castle’s final season drops this fall on Amazon Prime.
– Source

Gallery Updates News Press The Man In The High Castle

Press/Photos: ‘The Man In The High Castle’ Season 3

The new trailer for season 3 of The Man In The High Castle will premiere tomorrow! I’ll be sure to add it to the site but make sure you are following the series twitter for the first glimpse. I’ve also added a new promotional image for season 3. Enjoy! 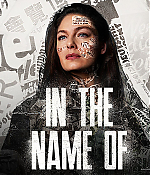 Alexa was at SDCC today promoting The Man In The High Castle Season 3. I can’t wait for the new season. Supposedly they showed an extended clip at the convention. We got lots of awesome photos. I’ve added them to the gallery and will add any more I come across to this post. So be sure to check out the links below. Big thanks to my friend Marie for some of these! 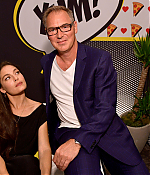 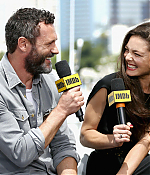 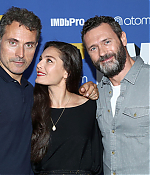 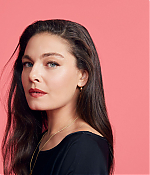 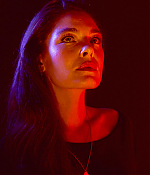 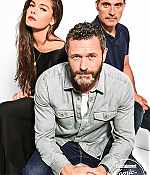 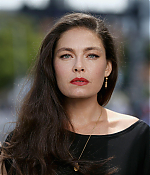 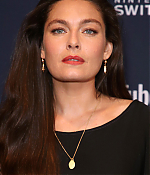 Press: ‘The Man In The High Castle’ is headed to SDCC

The Man In The High Castle is headed to SDCC! There is no news on if Alexa will be in attendance or what cast members will be there. It looks like it’s just a panel and not a screening. I’m so excited! Perhaps we will get season 3 news.

Cosplayers start your engines, San Diego Comic-Con is almost upon us!

Every summer, San Diego becomes a Mecca for nerd culture as thousands of fans hit up San Diego Comic-Con to celebrate their favorite comics, movies and TV shows. Even if you can’t make it to the con though, you can still fly your nerd flag by trolling twitter for pics, tuning into live streams of panels and, of course, following TV Guide for all the latest news and coverage.

To help guide your con experience, whether you’re on the ground or following from afar, here’s all the info you need about every TV panel headed to Comic-Con this summer.

Press: The Man In The High Castle takes the top spot as most popular digital series in the US

Amazon is picking up steam. The Man In The High Castle and The Grand Tour, both on Amazon are in the lead. Here are the full insights from Parrot Analytics.

• Over the holidays, Amazon Video titles did quite well, ranking first and second by average popularity. The Man in the High Castle, whose second season was released on December 16th, had about 19% more demand than The Grand Tour, which is still airing new episodes weekly.

• Though both Amazon series released new content recently, they still had only about 5% more demand than Netflix’s summer hit Stranger Things, which has remained solidly among the top digital originals six months after its premiere. Its demand may be high over the past few weeks because it was nominated for several Golden Globes, which will be announced on January 8th.

Press: ‘The Man In the High Castle’ Renewed For Season 3 By Amazon, Gets A Showrunner

Overmyer fills the void left by the sudden departure of The Man in the High Castle developer/executive producer/showrunner Frank Spotnitz in the middle of production on Season 2 after reported clashes with the streaming service. There was no immediate replacement for Spotnitz at the time, with the existing producing team taking over his responsibilities.

After breaking streaming records for Amazon in Season 1, the second season of The Man in the High Castle premiered with the most viewers over its debut weekend of all scripted Amazon Original Series, according to the network.

“As timely as ever, the exploration of characters at a dark point for humanity has provided incredible stories for two seasons,” said Joe Lewis, Head of Comedy and Drama, Amazon Studios. “Eric and his team are doing an incredible job crafting stories about the inner lives of those who struggle to do good in a world that is not.”

Based on Philip K. Dick’s Hugo Award-winning 1962 alternate history novel, season two of The Man in the High Castle, released on Dec. 16, continues to explore what would have happened if the Allied Powers had lost World War II. While Germany controls much of the East Coast and Japan controls the West Coast, the Rocky Mountains have become a “neutral zone”—and ground zero for a resistance, led by a mysterious figure known only as “the Man in the High Castle.”

Overmyer’s series credits also include St. Elsewhere, Homicide: Life on the Street, Law & Order, The Wire, New Amsterdam and Treme, which he co-created with David Simon. With his colleagues, he has shared a WGA award and an Edgar award for The Wire, and a Peabody award and a PEN teleplay award for Treme.
– Source

News/Press: ‘The Man In The High Castle’ Nominated for a Satellite Award!

You’ve reached Alexa Davalos Web the original and longest running fansite for all things Alexa Davalos on the web since 2005. Alexa is best known for her roles in Angel, The Chronicles of Riddick, Feast of Love, Mob City, Defiance, The Mist, Reunion, and many more. She can currently be seen on Amazon’s The Man In The High Castle playing Juliana Crain. Browse the site and visit our extensive gallery with over 29,000 photos. Be sure to follow the site on twitter, facebook, and bookmark us to visit again. – J.

The Man in the High Castle

Life seems good for Juliana Crain. She's intelligent, has a loving family and great at martial arts. Her martial arts class is taught by the Japanese conquerors who rule part of America, and being part of the Nazi Youth is expected of young men in the U.S. The series takes place in an alternate history of the U.S. on what would have happened if the Allied Powers lost World War II. The series takes place 17 years after that loss. The Nazis control the eastern United States, while Japan controls the Pacific Coast.
IMDB /   Photos /   Videos /   Official

After the murder of his family, Marine veteran Frank Castle becomes the vigilante known as "The Punisher," with only one goal in mind: to avenge them.
IMDB /   Photos /   Trailer /   Official

The Man In The High Castle Season 4 Teaser

Privacy Policy | Cookie Policy | Disclaimer
© 2005-2019 Alexa Davalos Web / Theme by Sin21 / Header by EDGE Design / Back to top / Homepage
Alexa-Davalos.com is a non-profit fansite for entertainment purposes only. All content posted on this site is used under the Fair Use Copyright Law 107. All photos are copyright to their respective owners. No copyright infringement is ever intended. If you see something you think belongs to you and would like it removed please contact us. All graphics & original content belongs to us. We are in no way affiliated with Alexa.

Find out more or adjust your settings.

This website uses cookies so that we can provide you with the best user experience possible. Cookie information is stored in your browser and performs functions such as recognising you when you return to our website and helping our team to understand which sections of the website you find most interesting and useful.

Strictly Necessary Cookie should be enabled at all times so that we can save your preferences for cookie settings.

If you disable this cookie, we will not be able to save your preferences. This means that every time you visit this website you will need to enable or disable cookies again.